The Freedom of Graphic Journalism

“I think there’s something very personal about a drawing,” says Andrew North, a freelance graphic journalist. “Getting a pencil, ink pen, and watercolours out to come up with an idea of what you saw that engages people in a different way.”

North—a former foreign correspondent for the BBC—says that graphic journalism, the practice of presenting longform reporting through drawn images and comics, can draw attention to stories which may otherwise go unnoticed. “It’s a way of getting a different kind of audience to tune in,” he says.

In a recent series for Harvard University’s Nieman Journalism Lab predicting how journalism will develop in 2021, ProPublica reporter Beena Raghavendran predicts that art and journalism will be more interconnected in the coming year.

“Empathy—putting yourself in someone else’s shoes, a natural product of journalism—is now limited by our screens,” says Raghavendran. “When we tie our journalism to art, stories feel bigger than just you and your screen.”

A common way these two mediums intersect is graphics journalism. Some comics historians trace the origins of graphics journalism back to the American Civil War that started in 1861—it is by no means a recent invention. At the time, with camera technology still nascent, drawing battle scenes was a way to visualize war coverage without photographs. Today, some acclaimed pieces of graphics journalism include Art Spiegelman’s impressionistic Holocaust memoir series Maus and Josh Neufeld’s A.D.: New Orleans After the Deluge.

Joe Sacco, who is considered to be a pioneer in comics journalism, spent his early career in comics covering the Israel-Palestine conflict and the Bosnian War. Meanwhile, Sacco’s most recent graphic novel, Paying the Land, sees the author journey to Canada’s Northwest Territories to report on the effects of resource extraction and mining developments on Indigenous culture. “There is a little bit of a tension in the work I do, between the facts and quotes, which should be correct, and the drawings, which are my interpretation of some of the things I’m hearing and some of the stories I’m telling,” said Sacco on a recent episode of Canadaland. “There’s a fact-based element and a subjective element swirling together.”

Despite each of these works receiving critical praise, graphics journalism has yet to find widespread usage among most journalists in a field where art is still often treated as secondary to writing. In her book Drawing Disaster: Visual Witness, Comics, and Documentary Form, author Hillary L. Chute points out that writing is often seen as a more reliable form of communication than drawing or visual art. “Why, after the rise and reign of photography, do people yet understand pen and paper to be among the best instruments of witness?” asks Chute.

The medium can be particularly labour intensive for artists and the time needed to produce any extended piece of graphic reporting is at odds with the rapid churn of the news cycle. Yet it also offers opportunities for visual storytelling unlike anything else in journalism.

In the preface for his 2012 graphic novel, Journalism, Sacco lays out why he is so drawn to comics as a medium for journalism. “The blessing of an inherently interpretative medium like comics is that it hasn’t allowed me to lock myself within the confines of traditional journalism,” he writes. The interpretive nature of graphic journalism which Sacco speaks of is one of the medium’s most radical and important distinctions from traditional reporting, one that opens space for journalists and artists to play with subjectivity and perspective in their work. Unlike most long-form reporting, journalistic and non-fiction comics offer writers the ability to intertwine interviews and first-person accounts with imagery that is most authentic to the artist’s subjective experience. The images and words become inextricable from one another.

North describes his particular approach as reportage drawing. “I’m trying to portray what I saw, what I experienced,” he says.

North’s style veers away from the more traditionally cartoonish imagery used by Sacco, instead relying on a delicate blend of watercolours and ink drawing. Much of North’s work has the quality of an old photograph, with details smudged and smears of colour bleeding across the page. “I had to work to some extent from photographs, but when I could, I would just sit down and draw people,” he says. Among North’s most ambitious works of journalism colliding with art is an interactive, panoramic sketch of a market in Tbilisi, Georgia. “It started off as a drawing which was, in a way, trying to enshrine the lives of these people working there,” he says.

Hamilton-based cartoonist Joe Ollmann’s past non-fiction work has included a collaboration with journalist Dawn Paley for Extraction! Comix Reportage, a non-fiction anthology detailing resource extraction around the globe, and his 2017 biography of author and gonzo journalist William Seabrook, The Abominable Mr. Seabrook. While not a journalist himself, Ollmann says that art being merged with non-fiction storytelling makes room for “poetic truth,” giving the writer space to present their subjective truth in a work still grounded in research.

“It’s what you show and what you choose to not show, or what you accentuate and what you downplay, you are changing the story,” he says. “It’s embracing the fact that there’s going to be an editorial bias.”

In the closing paragraphs of Sacco’s preface to Journalism, he argues that a slavish adherence to objectivity in reporting is disingenuous to audiences. “I, for one, embrace the implications of subjective reporting and prefer to highlight them,” he writes. “For good or for ill, the comics medium is adamant, and has forced me to make choices. In my view, that is part of its message.” 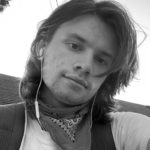 Alex Ramsay (he/him) is a freelance writer based in Hamilton, Ontario and is completing a bachelor of journalism at Ryerson University in Toronto. He currently works at Ryerson’s campus radio station, CJRU 1280AM, as the station’s news director and has helped program the Art Gallery of Hamilton’s World Film Festival as part of the Close-Up Film Committee.