“Playing Catch Up”: How many daily podcasts is too many?

The Globe & Mail is launching a daily news podcast. To stand out from their competitors, they’ll have to do it the right way.

The beginning of the first episode of the New York Times podcast The Daily is simple and clean. The futuristic theme music plays for a few seconds, and then the host, Michael Barbaro, comes in—his voice a little quieter, a little higher, and a little quicker than the soothing, but inquisitive intonation many of us have come to know and love from listening to later episodes of the show. He says, “This is the first episode of The Daily, a new show from the New York Times. We’re here because this moment demands an explanation.”

In January, The Globe and Mail executive editor Angela Pacienza announced on Twitter that the Globe will be throwing its hat into the daily news podcast ring, with a team led by Kasia Mychajlowycz, former Canadaland producer and host of the popular 2019-2020 investigative series Cool Mules. However, the Globe isn’t the first Canadian institution to try its hand at the format. The team now faces a very particular challenge: how do you assert yourself as a contender in a field that’s already been populated by your competitors for years?

The Daily has been copied by newsrooms all over the world—and for good reason. At the time of its launch in February of 2017, the format was unique: take one news story—just one—for each day of the work week, and look at it in-depth for 20 to 30 minutes. It played on the steady rise in popularity of highly produced audio content and it addressed common concerns around information overload and news fatigue. Now, the show has risen to the top of virtually every podcast ranking in the English-speaking world, with over two million downloads per episode. In Canada, CBC’s Front Burner, which launched in fall of 2018, leads the pack, with episodes consistently landing in the Apple Podcasts Top 100 Episodes. Narrowing the search to Top 100 News Episodes also makes space for multiple episodes of Frequency Podcast Network’s The Big Story, and even the Toronto Star vehicle This Matters.

“I think a daily had always been at the back of our mind,” says Pacienza. The Globe got into podcasting back in 2016, launching Colour Code, a podcast focused on race, and The Risk Takers, a show that centred business and the economy. Their most recent show, Stress Test, serves as a guide to personal finance in the wake of a pandemic. “We felt like now we were ready to take on the challenge of a daily and we thought we had something to offer in that space.”

Pacienza describes this project as an opportunity to tell stories in a new way for a new generation. “We would like it to bring our journalism to an audience that currently doesn’t engage with the Globe and Mail,” she says. “And it’s no secret that a podcast audience is probably different than who receives the printed newspaper. So it’s a chance for us to show off some of our journalism in a different format and to different people.”

The Canadian Podcast Listener 2020 Survey found that just under half of podcast listeners are between 18 and 34 years old. In addition, podcasts aren’t paywalled (unlike the Globe and Mail website), which also opens up content to a wider range of listeners. But, she says, it’s not just about finding the audience. It’s also about offering what she sees as the Globe’s unique qualities, especially their business and economic reporting, in a new format. “This podcast will…enable our talented pool of reporters to have a more intimate conversation with listeners,” she said in an email. “There’s so much more that we can’t say with text alone.”

“I think, strategically, it makes sense for big news organizations to be figuring out how they can provide value in the podcasting space,” says Jeff Ulster, the co-publisher of The Canadian Podcast Listener and co-founder of The Podcast Exchange. Ulster has been studying podcast audiences in Canada since 2017. From his perspective, a podcast’s success depends on whether the people producing think of it as an afterthought or an opportunity to create something new for their audience. “Places like the Globe…are all kind of playing catch up,” he says. “This stuff is new for all of these media outlets. I think they’re a little bit late to the game. I expect them to make a lot of mistakes before they get it right. And I think a lot of their success depends on how much of the organization truly understands and supports what they’re trying to do.”

Wait, There’s More, a daily news podcast that was produced by Global News and ran for over 250 episodes, is a cautionary tale in that regard. The show, which was hosted by Tamara Khandaker, was abruptly cancelled when the company laid off a large portion of their staff in July of 2020.

“I feel at peace with it now,” says Khandaker, reflecting on her experience at Global News. “The way that the team was structured and the amount of time that we were putting in—we basically just didn’t have lives.” Khandaker hosted and produced the show , along with another producer, an editor, and an editorial assistant who split his time with another show. The full-time members of the team regularly worked ten hours days and weekends. “Since then, I’ve had some time to rest and recover and recognize that that was really messed up, the amount that we were working. And how little support we were getting from the company…I still do feel quite sad because we just put our hearts and souls into that project.”

While the Globe might have to compete for attention in a crowded field, they do have one secret weapon on their side: Tamara Khandaker. In late February, Pacienza announced on Twitter that Khandaker will be the host of the new Globe show. “I’m really excited to develop this new show and build something that helps people feel more connected to the world around them,” says Khandaker.

With experienced audio journalists like Khandaker and Mychajlowycz at the helm, it seems that the Globe may be putting in that level of investment that Ulster says is the key to success. “[Khandaker] asks a lot of the questions that we’re thinking,” says Pacienza. “She’s got this unique way of bringing people along with her as she discovers and unravels things, and I like that about her.” 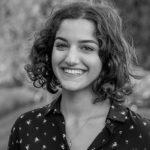 Emily Morantz has wanted to be a writer for as long as she can remember. After completing her undergraduate degree in English at the University of British Columbia, she decided the abstract world of academia wasn’t for her, and set her sights on journalism school. In addition to the written word, Emily has a passion for podcasts, and can usually be found with a coffee in hand and her headphones in. As an intern at the Frequency Podcast Network, she produced her debut full-length audio documentary for their Paradigm series, about her family’s experience with medically-assisted death, entitled “The Closing Door.” Emily is a proud Winnipeger, a bookworm, and a comfort food enthusiast.