The [   ] Review of Journalism ([ ]RJ) is Canada’s watchdog on the watchdogs. Founded in 1984 by the late Don Obe, former chair of the Ryerson School of Journalism, this award-winning magazine is produced by graduate and undergraduate students in their final year with the support of faculty and industry professionals.

Obe believed that the [ ]RJ’s job was to probe the quality of journalism in Canada. After nearly three decades, we’re still on assignment. The mission of this year’s group of editors is to chronicle Canadian journalism by questioning its faults and celebrating its successes. We will examine the forces shaping journalism today to foster critical thinking about, and accountability within, the industry.

In order to reflect the widespread changes in the journalism industry, the [ ]RJ continues to evolve. Don Obe launched a magazine; today, in addition to our annual spring print issue, we also publish content on our website, podcast, and newsletter.

Accountable: We believe in holding Canada’s watchdogs accountable. We will pursue difficult stories and ask difficult questions. We will also hold ourselves to the professional standards we expect from other journalistic publications.

Critical: We believe in thoughtfully examining the faults and merits of Canadian journalism while remaining engaging. We will keep a critical eye on the biggest issues facing journalists and media organizations.

Independent: We believe in the importance of a free and independent press. We will not be subjected to censorship or unduly influenced by commercial interests.

Transparent: We believe in fostering transparency within media organizations. We will explain our processes to our readers and rectify our errors in an open and clear way.

Learn more about the current masthead.

STEPHEN TRUMPER has been a part-time instructor at Ryerson since 1995. He has edited dozens of articles for the [ ]RJ (many of which were nominated for National Magazine Awards). Most of Stephen’s early working life was spent at Toronto Life, where he was the managing editor for nine years. He is currently on the board of the Canadian Abilities Foundation, and writes the back-page column for its publication, Abilities. In June 2012, Stephen was awarded the Queen’s Diamond Jubilee Medal for public service. In June 2013, he was honoured with the Foundation Award for Outstanding Achievement from the National Magazine Awards Foundation.

SONYA FATAH joined the Ryerson School of Journalism in a full-time capacity this year. She comes to the school with over 15 years of international reporting experience and several years of part-time teaching. She has reported in Canada, Pakistan, India and South Africa, covering stories such as the assassination of Benazir Bhutto, the earthquake in Kashmir that took 80,000 lives, and the large-scale terror attacks in Mumbai. Her work has appeared in Maclean’s, the Globe and Mail, the Toronto Star, The Walrus, Columbia Journalism Review and GlobalPost. She also directed a documentary feature, I, DANCE. on dance and identity featuring a Pakistani classical dancer pursuing a banned art form. Fatah is a graduate of the Columbia University Graduate School of Journalism and also has a Master’s degree in international affairs from Columbia University’s School of International and Public Affairs.

Editors from Canada’s top magazines—as well as high-profile freelance feature writers and editors, and other faculty at the School of Journalism—help students develop their stories.

JASON ANDERSON is a writer, film programmer and teacher based in Toronto. He regularly writes for such publications as The Toronto Star, Uncut magazine, Sight & Sound, Movie Entertainment, Today’s Parent and Men’s Fashion and his work has appeared in The Walrus, Toronto Life, Readers Digest Canada, Toro and Entertainment Weekly. He won a Western Magazine Award for his music columns for Swerve magazine in Calgary. He is a programmer for the Toronto International Film Festival and the Kingston Canadian Film Festival and teaches film criticism at the University of Toronto. His novel Showbiz was published in 2005 by ECW Press.

RYAN BIGGE is a Senior Content Strategist at Shopify. Before being digitized, Ryan spent a decade as a freelance print journalist and was an instructor at the University of Toronto’s School of Continuing Education. In 2013, he spoke about designing analog souvenirs for a digital era at SXSWi.

HALEY CULLINGHAM is the senior editor of Hazlitt and a senior digital editor at Penguin Random House Canada. She was previously the editor-in-chief of Maisonneuve. Her work has appeared in The Globe and Mail, The Tyee, The Awl and elsewhere.

TIM FALCONER is the author Bad Singer: The Surprising Science of Tone Deafness and How We Hear Music and three and a half other books. He is a mentor in the MFA in Creative Non-Fiction program at the University of King’s College and an editor in the Literary Journalism program at the Banff Centre.

KATHERINE LAIDLAW is an award-winning writer and former senior editor of The Walrus in Toronto. She writes a monthly column for Hazlitt, and features for other magazines including The Walrus and Toronto Life. Her work has been anthologized in Best Canadian Essays and Best Canadian Sports writing, and she has held masthead positions at Reader’s Digest Canada in Montreal and Up Here in Yellowknife.

VERONICA MADDOCKS has been the Review’s research consultant since 2005. Now Toronto Life’s chief of research, she has received two Gold Awards and one Honourable Mention at the National Magazine Awards under the name Veronica Cusack. Her non-fiction book, The Invisible Soldier, was published by McClelland & Stewart in 2004.

LAUREN MCKEON is the former editor of This Magazine. Before that, she worked as a reporter, editor and writer in the North for several years, living in Yellowknife, and travelling Canada’s territories and northern Alberta. Her work has recently appeared in Hazlitt, Toronto Life, and The Walrus. In 2015, she won a gold National Magazine Award in the personal journalism category for her Toronto Life piece “Save me From My Workout.” She tweets infrequently @mckeonlauren

Read all about our awards here.

Praise for the [ ]RJ

“The Ryerson Review of Journalism has been a must-read for me for 20 years. The depth of reporting, professional writing quality, and critical insights into the issues and personalities that matter in Canadian journalism are extraordinary for any media magazine—let alone one created by student journalists.”

“I can think of no other publication in this country that regularly holds journalism up to so clear and uncompromising a light.”

Features Writer, The Globe and Mail

“The Review is the closest thing to a reliable conscience that Canadian journalism has.”

“The Review should be essential reading for Canadian journalists. It makes us better informed and better at what we do.”

“I have been heard to say, more than once, that if the Ryerson Review of Journalism didn’t exist, we’d need to invent it. This student-produced… publication often publishes stories about journalism in this country in ways that can be found nowhere else, including magazines.”

“There are always one or two articles in every issue of the Review guaranteed to draw howls of outrage and buckets of bile from within the profession, which is always fun to observe.”

The [ ]RJ represents months of work by dedicated students and thousands of dollars in production costs. We thank the friends, supporters, and benefactors who help keep the magazine afloat—and growing. 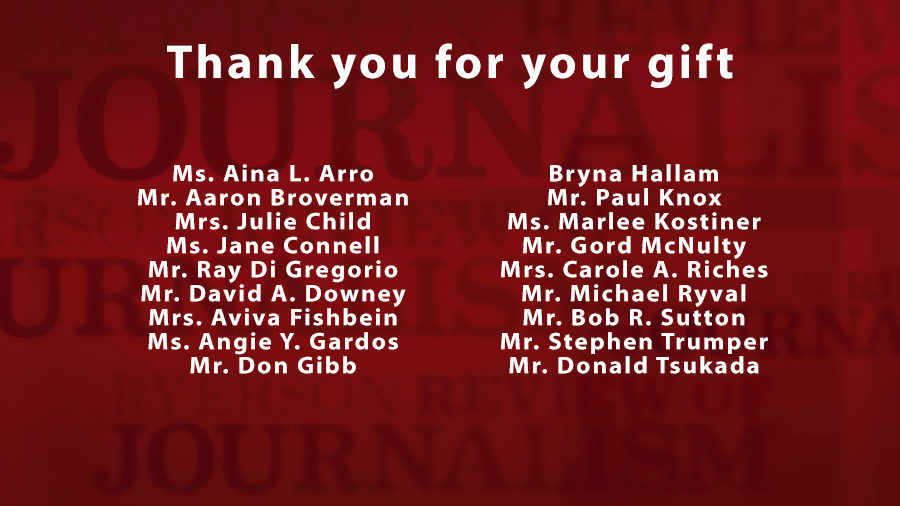 If you would like to become a become Friend, Benefactor, or Patron of the [ ]RJ, click here.