Stop talking about the niqab

Journalists have been enthralled with the niqab debate over the last few weeks. In order to get a better sense of what to make of the niqab coverage, I spoke to the communications director at the National Council of Canadian Muslims, Amira Elghawaby.

Elghawaby’s most pressing critique of niqab journalism is simply that there’s too much of it. Elghawaby noted that, “The media has a responsibility to report the news” but that journalists have had trouble distinguishing “between news, and the deliberate attempts of the Conservative party to keep the issue alive.”

The result of this failure, according to Elghawaby, is the amplification of the niqab “issue multiple-fold compared to other relevant issues raised during leaders’ debates.” 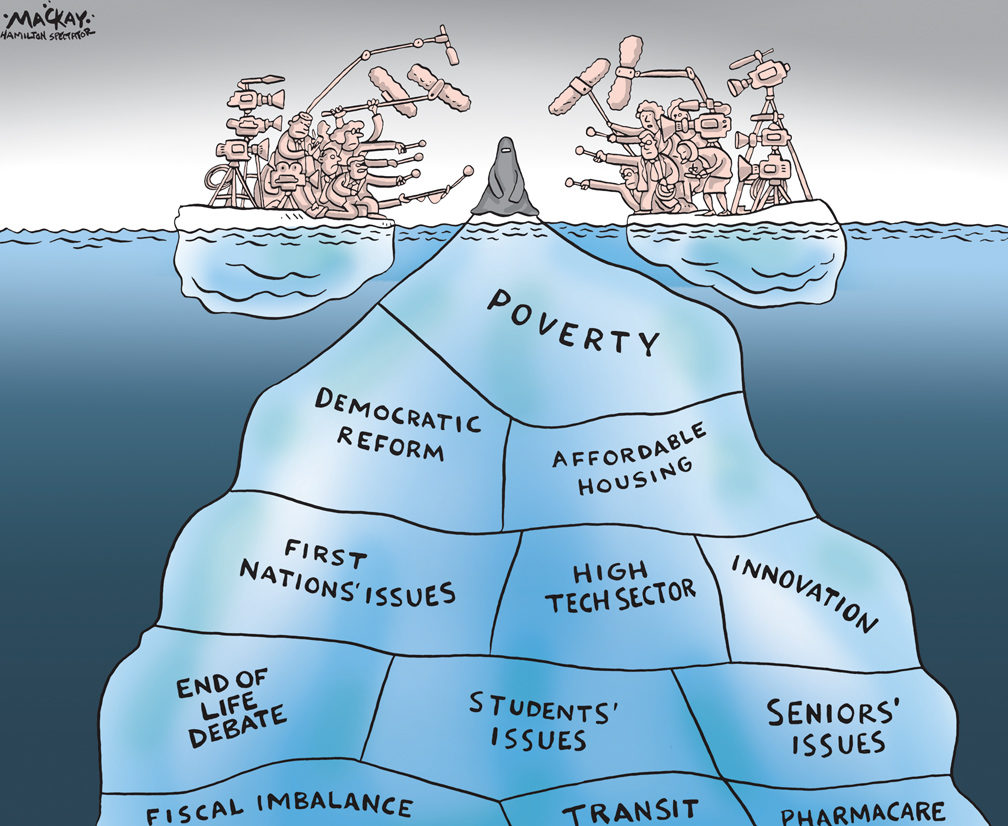 Elghawaby certainly has a point, and so I wanted to look a little deeper to get a sense of how much niqab coverage there has been. To do this, I went to the websites of the National Post, the Toronto Star and The Globe and Mail, and counted how many articles from October 7 to October 14 contained the term “niqab,” and then did the same for “trans-pacific partnership.”

The niqab debate, as many commentators have accurately pointed out, is focused on an insignificant issue, with only two of 680,000 potential citizens being affected by the ban since 2011. Meanwhile, the Trans-Pacific Partnership has geo-political significance for states around the world, including Canada.

The results I found don’t reflect this, with 133 mentions of “niqab” found, compared to only 102 for “trans-pacific partnership.”

Despite this, Elghawaby notes that the overwhelming emphasis in journalism on the niqab has led to some positives.

“The diversity of voices given space on this issue has been refreshing. Women who wear niqab slowly were given space to share their perspectives and experiences.”

There are several good examples of this from the Toronto Star and the CBC.

As such, Elghawaby says that “while the [niqab] issue was over amplified, given its relatively minor impact on the lives of the vast majority of Canadians, including Canadian Muslims, there seemed to be a sincere effort on the part of media to hear from those directly impacted, or who had a perspective that countered popular opinion, to share.”

In a journalism landscape where people constantly speak for Muslim women, the fact that Muslim women have been given more opportunity to speak for themselves is important.

There are exceptions, of course, like this CBC piece that tells the exciting saga of what it was like for a white woman to wear a hijab for a day, as if there aren’t enough Muslim women who could speak more authoritatively to the issue.

Overall though, while the coverage of the niqab debate did draw up some positives due to the range of voices speaking on the issue, Elghawaby says, “It would be nice if other equally or more important issues were given this kind of treatment and attention!”

Let’s hope her wish comes true in the last few days of the election.

Davide is the blog editor of the spring 2016 issue of the Ryerson Review of Journalism. He also works as an associate editor for the Islamic Monthly. Davide's articles have appeared in numerous publications including Al Jazeera America, The Globe and Mail and the National Post.