Chrome Extension Calls Out use of the Term “Alt-Right”

What should a journalist do if a putative white nationalist, fascist, white…
Total
0
Shares
Share 0
Tweet 0
Pin it 0 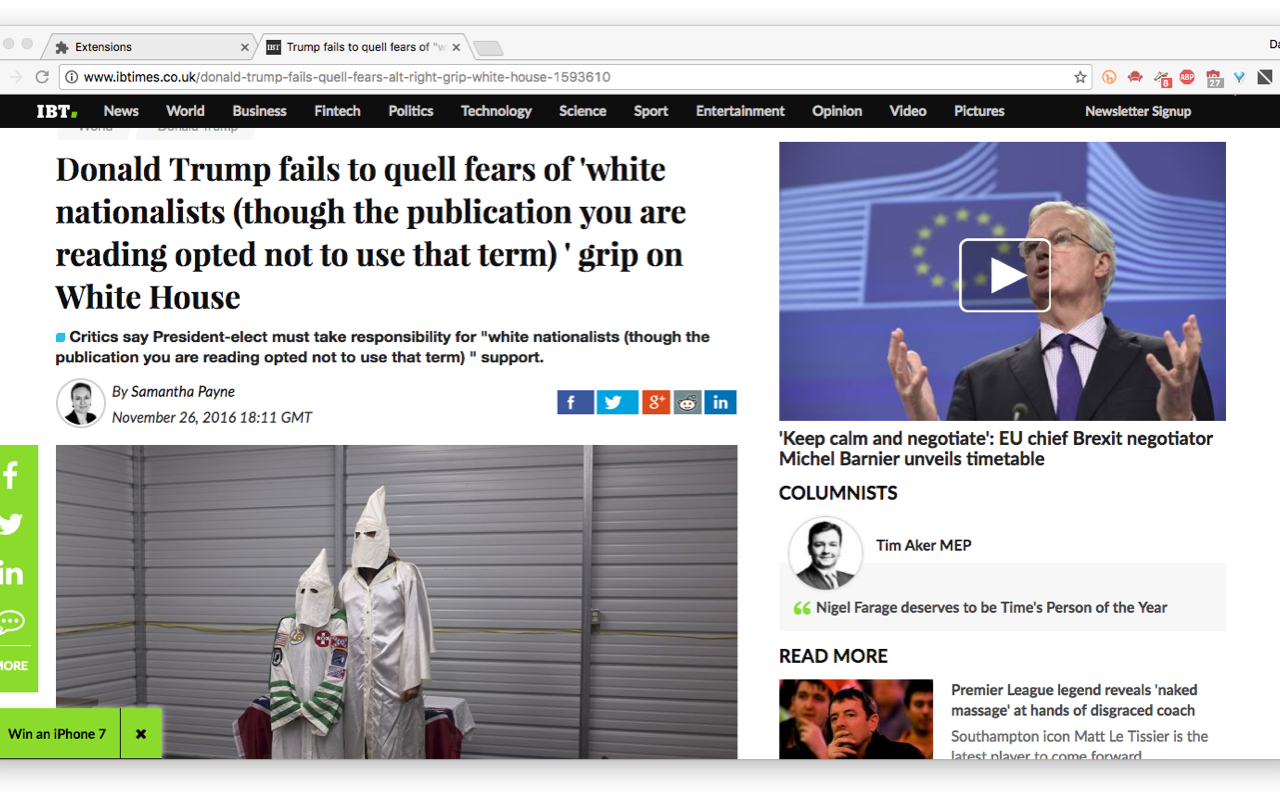 What should a journalist do if a putative white nationalist, fascist, white supremacist, or neo-Nazi asks to be referred to using a different term of their choosing?

In the halcyon days before America’s most recent electoral cycle, this was a largely theoretical question—the kind of thing that could be fruitfully and endlessly debated in journalism seminars.

Now, however, it is journalism’s reality.

The Associated Press issued a series of guidelines regarding the use of the term “alt-right” that boil down to: rarely and, if absolutely necessary, place the term in scare quotes. For its part, the Canadian Press has issued a style guide update advising journalists to add modifiers such as “so-called” ahead of the term.

The problem these guidelines seek to solve is that a reader who is not up-to-date on the chosen nomenclature of white nationalists might not recognize what the term “alt-right” means. It is by no means intuitive, and arguably hides the meaning of the belief system it seeks to describe. Globe and Mail editor-in-chief David Walmsley told the paper’s public editor, Sylvia Stead, “Journalists need to keep to the facts, not to easily spout self-serving and invented phrases that sometimes even aid the hiding of the true meaning.”

“Such commentary, however, is increasingly divorced from how news is consumed.”

This comment would normally mark the beginning of a long reflection on journalistic best practices. Such commentary, however, is increasingly divorced from how news is consumed. With the rise of digital publishing and social media, news consumers are less likely to get all their information from a small, trusted cadre of publications. As a result, editorial standards grow inconsistent and media commentary can easily become detached from the material it covers.

To address this problem, the Ryerson Review of Journalism has created “Alt-Righteous,” a Google Chrome extension that replaces “alt-right” with “white nationalists (though the publication you are reading opted not to use that term)” in the text of news stories by publications who have used the term.

This is hopefully the first in a series of Ryerson Review of Journalism experiments that use technology to combine programmatic satire and media commentary. The extension is not perfect; it will, for instance, modify words in direct quotes. Alt-Righteous will, on occasion, make a sentence less clear. It will, however, ensure that unchallenged uses of the term don’t make it into your reading. In this way, the extension allows the user to visualize how this journalistic debate actually affects the news. Moreover, by applying editorial standards to sites that have applied a different calculus, the extension provides a degree of editing that may be lacking on some Internet news outlets.

Alt-Righteous is available for free in the Google Chrome store. If you would like to experiment with the code for this extension or use it to make one of your own, it’s publicly available on GitHub without licensing restrictions.