On February 21, the Toronto Star pulled its controversial Gardasil investigation offline after weeks of public backlash and outrage. A note from publisher John Cruickshank posted on February 20 said that while the paper remains “committed to this line of reporting, we have concluded that in this case our story treatment led to confusion between anecdotes and evidence.”

The story initially ran on February 5 with the headline “A wonder drug’s dark side,” and detailed the accounts of three young women who had experienced adverse health issues within weeks of receiving Gardasil, an HPV vaccine. The investigation depicted horror stories of swelling joints, muscle spasms and, in one case, death. Through the 2,000-plus words of fear mongering, the article included one caveat in its 11th paragraph: “There is no conclusive evidence showing the vaccine caused a death or illness.”

Within hours of being posted online, the story received pushback from the medical community. Dr. Jen Gunter, a San Francisco-based ob-gyn openly critiqued the article on both her blog and in a piece for Canadaland, citing many troubling aspects in the reporting. Most notably, the reporters relied heavily on anecdotal evidence while giving little weight to evidence-based medicine, misinterpreted data and failed to disclose that one of the medical experts consulted had worked for a Gardasil competitor. Gunter chastised the Star for failing to disclose essential facts, writing “the paper’s editors should know better than to distort facts with presentation, and yet they chose sensationalism over truth.”

The common concern was that this investigation’s influence could prevent young women from deciding to get vaccinated, all for invalid or inaccurate reasons. As Gunter writes on Canadaland, “I don’t believe anyone who read it who is contemplating an HPV vaccine for themselves or their child is going to remember the short statements about vaccine safety: no, they will remember the photograph of the anguished mother or the girl with the nasogastric tube. I know I do.”

Health reporter Julia Belluz critiqued the piece for Vox.com, calling it a “textbook case of how to botch a health story.” She cited many of the same errors that Gunter had, including the reporters’ misuse of the Vaccine Adverse Effect Reporting System (VAERS). VAERS tracks what is known as “post-market surveillance,” which monitors vaccine safety after it has been administered. Anyone – doctors, nurses, patients themselves – can report what they believe to be vaccine-related health issues to VAERS. Because it is self-reported, the data cannot be considered conclusive. The investigation’s reliance on VAERS to support the girls’ claims left Belluz fearing the worst about the article’s influence: “There’s no doubt that, despite the caveats, this report will turn people away from the vaccine unnecessarily. This is a particular tragedy in the Canadian context, where the uptake of the HPV vaccine is already abysmally low.” 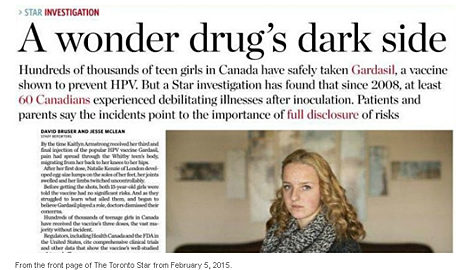 In response to the criticism, the Star went on the offensive. When Belluz reached out to the paper for comment, editor Michael Cooke told her to “stop gargling our bathwater and take the energy to run yourself your own, fresh tub.” Columnist Heather Mallick slammed Gunter’s criticisms, telling readers “Here’s a tip: don’t read a website run by a rural doctor whose slogan is ‘wielding the lasso of truth.’” (Gunter is a board-certified ob-gyn in both Canada and the U.S.)

Faced with more criticism, the Star began to backpedal. The headline was changed to read “Families seek more transparency on HPV vaccine.” Investigative editor Kevin Donovan, in another piece for Canadaland, said he stood by the investigation and reporting, stating the piece “provided a balanced account of concerns around an important public health initiative.” Donovan also said he “welcome[s] debate,” and believes the Star’s readers “are smart enough to take in all of the information available, including our story, and make their own decisions.”

Evidently, the publisher disagreed. The story was pulled from the Star’s website just eight days after Donovan’s defence.

The Star implemented a policy in 2008 that states, it will not unpublish any material, save for legal reasons. As public editor Kathy English wrote in a 2009 report on unpublishing, all content is regarded as “matter of public record whether it is published on newsprint or online.” English’s report included the opinions of editors of papers from across North America, and notes that unpublishing should only happen in “very rare” circumstances –instead, papers should update stories as they change to remain transparent and most importantly, weigh the implications of their content before it goes to print. The report goes on to conclude that “news organizations do not rewrite history or make news disappear.”

The Star may want this to just disappear, but it’s not going to. No amount of updates could lessen the Gardasil story’s dangerous implications. The investigation is a black mark on an otherwise well-reputed unit that has uncovered some of Toronto’s most shocking news stories, from the treatment of the elderly in nursing homes to the former mayor’s substance abuse. Since Donovan’s stance, both the publisher and public editor have issued apologies. Cruickshank summed it up nicely on CBC’s As it Happens: “We failed in this case. We let down. And it was in the management in the story at the top. I take responsibility and we will focus on doing better in the future.”

Just because the Star has deleted their mistake from public record, doesn’t mean we’ll forgive – or forget. 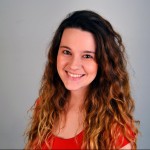 Stephanie Girardi was a Spring 2015 departments editor of the RRJ.