How the pandemic revealed the deficit of local news in GTA communities,…
Total
10
Shares
Share 10
Tweet 0
Pin it 0

How the pandemic revealed the deficit of local news in GTA communities, and why it matters

Nolan Machan, president and founder of independent online publication Oakville News, says that over the past year his publication has been, “hyper COVID-19- and health-focused.” He has been running daily Oakville-focused COVID updates to keep the Oakville community informed. Machan says that, as a result of the COVID-19 coverage, as well as the roll out of a new, more mobile friendly format, his readership substantially increased, from an average of between 60,000 and 100,000 page views per month, to a whopping 400,000 monthly page views or more this past February.

Machan notes the lack of availability of local news that exists in many small towns and municipalities outside of Toronto. Over the course of the pandemic, people have turned to their local journalism outlets to get information about the vaccine rollout, to see reports on case numbers in their community, and to find the latest restrictions and recommendations from their local public health officers. With many pandemic-related restrictions being very location-specific, the need for local coverage became apparent for communities in the Greater Toronto Area (GTA), made up of Halton, York, Peel, and Durham regions, which have been historically underserved by news organizations and publications in Toronto. Relevant public health journalism in the GTA lacked consistency, casting a wide net of communities in need of in-depth coverage and clarity.

“There is no doubt that the Toronto media dominates the media landscape of the greater Toronto area,” says April Lindgren, head of the Local News Research Project, which combines content analysis and digital mapping to explore issues related to local news. “Most of the news they [GTA residents] get is very Toronto-centric.”

The number of local journalism outlets in the GTA has been declining for a while. According to data from Lindgren’s Local News Research Project, since 2008, eight local editorial and non-editorial media outlets have either closed or decreased service in the GTA, and seven have opened or increased service. According to the same organization, four have suffered from layoffs or pay cuts or have cancelled print editions since the beginning of the pandemic last March.

“The [data in the map shows that] suburban areas outside of Toronto are poorly served in terms of access to diverse sources of verified, timely, independently produced local journalism,” says Lindgren.

In contrast, print and online news media fare a little better. There are a number of Metroland-owned community papers outside of Toronto, but some are the single source of local journalism for the large localities they cover. Mississauga, Brampton, Markham, Oshawa, Vaughan, and Richmond Hill are all among the top 40 most populated cities in Canada—and are all included in the GTA. This means there are communities with populations that exceed 100,000 people that are receiving insufficient local news coverage, in terms of timeliness and diversity of perspective. This is notable because a lack of local journalism affects people’s ability to be properly informed about the community they live in, and ultimately the decisions that they go on to make in their day-to-day lives—especially during a pandemic.

“The difference between mainstream media and local newspapers is that mainstream media is doing stories in a broader context,” says Caroline Medwell, executive director of the Ontario Community Newspapers Association (OCNA). “The community newspapers are hyperlocal…and they’re writing about what’s going on at the town council, or what’s going on with water or land rights. And in the case of the pandemic, [local news] was very specific to where you could get help or support, what the rates [COVID case numbers] in a neighbourhood are, and ultimately now, where you can get the vaccine.”

Community newspapers must apply to become part of the OCNA and benefit from their services. “There are strict criteria…you have to have a certain amount of news in your paper and on your front page. There has to be a masthead. We require an audit [of the paper’s circulation] and you have to have a physical address,” says Medwell,  adding that about half of the publications that the OCNA works with are independently owned, while the other half are owned by news corporations such as Metroland Media and Postmedia.

Another effort to amplify local journalism was recently made by the Toronto Star. The MyLocal tab on the Star’s website highlights local news coverage in communities across Ontario where it may be lacking. Readers can use the drop-down bar to select their local community and see its local coverage. The Star’s local news service appears to be available online only, and there are currently 32 local communities listed on the webpage, including Whitby, Burlington, and even areas outside of the GTA, like the Kawarthas.

It is unclear how exactly the Star is producing this content. It is not outlined on their website, and they did not respond to requests for comment. Although it remains purely speculative how MyLocal produces its content, the initiative is still a step forward for community news.

“Local advertising became very difficult because they [local businesses] simply weren’t open, and then the ones who were open, like the grocery stores—they had too much business, and so they didn’t want to advertise,” says Medwell.

Lindgren agrees. “Advertising was iffy before the pandemic, it disappeared during the pandemic, and it’s not clear to the extent of which it will come back after the pandemic,” she says, mentioning that it is difficult for publications to rely on one source of funding. There are other possible sources of revenue like crowdfunding, “but that requires people recognizing that the news organization is doing something valuable for the community,” says Lindgren.

“People do care about what happens at town hall—when they’re made aware of it,” says Machan, whose main priority is quality local news coverage for his community. It’s not necessarily that people don’t care about or don’t want to read or support local journalism, but when local publications only publish one or two news stories per issue and are mainly made up of advertisements just to sustain their existence—they aren’t serving anyone.

But despite increased readership and demand, he says it has been difficult to sustain Oakville News during the pandemic. “It’s really hard to ask a local retailer, ‘Hey, why don’t you advertise in Oakville News?’ when they don’t even know if they’re going to be open next week.” 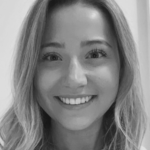 Téana Graziani is the former features section editor, and managing editor of the University of St. Michael’s College newspaper, The Mike, and has reported for multiple publications including Her Campus, The Ryersonian, Daily Hive, and Goniec. Téana holds a bachelor of arts in contemporary history and political science from the University of Toronto and is currently completing a master of journalism at Ryerson University.