Covering Irma from Florida to the Caribbean

During the hurricane, Alex Dick-Read fled to his neighbour's house across the…
Total
0
Shares
Share 0
Tweet 0
Pin it 0 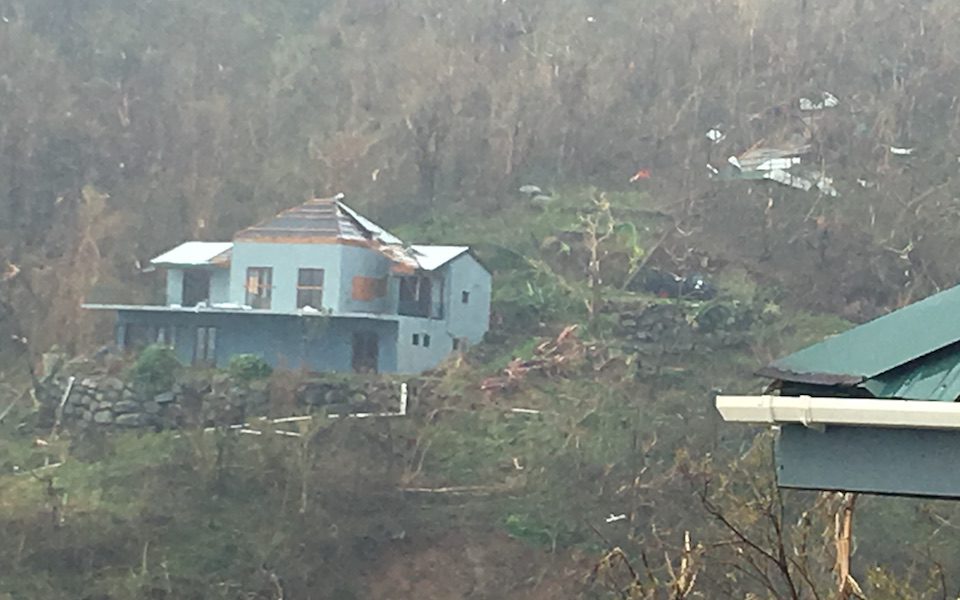 During the hurricane, Alex Dick-Read fled to his neighbour’s house across the street as his own home was nearly destroyed / Photo courtesy Alex Dick-Read

When Alex Dick-Read retired and opened a surf school and eco-tourism company on the island of Tortola in the British Virgin Islands, he believed that he was done with journalism. But when hurricanes Irma and Maria swept through the islands in September, he was thrown back into action, becoming a key correspondent in one of the worst affected regions.

“The situation immediately after the storm triggered my reporter instincts, and it made sense to get back on it again!” he said in an email. A previous phone conversation was hampered by the country’s fractured infrastructure, rendering it barely audible. “Basically, accessing the country is sometimes just difficult. Everything is collapsed,” he said through the phone static.

Born in Tortola, the largest British Virgin Island, Dick-Read was a journalist before starting his own company. His journalism career, which spanned 20 years, included working for the Caribbean Times, the Associated Press, and Reuters. He often reported on hurricanes and disasters. “Montserrat’s volcano kept me busy for two years at least,” he recalled. Dick-Read also founded the U.K.-based surf magazine, The Surfer’s Path, which he edited from the U.K. and the British Virgin Islands until 2014. When Irma struck, it was three years since he had done much writing.

Dick-Read was personally affected by the storms when they hit the island on Sept. 7. “My roof—did you say my roof?” he asked through the poor phone connection. “Yeah—most of it. And there was a lot of hiding out and running.” He and his family are now camping in the basement of his house, waiting for an anticipated insurance payout to rebuild his damaged home. He evacuated his son to a school in the U.K., and his business is on hold until his life is back on track. “Afterwards I realized that our traumatic story is very much average—really quite mild compared to things other people experienced,” he said.

Finding coverage for disaster-affected areas can be difficult, and when Irma struck in September, Dick-Read was one of many satellite journalists called on to report from-the-ground content for news agencies. Following the storm, a journalist friend from the U.K. reached out to see if he was okay, and suggested he start reporting on the region. With the help of his friend’s contacts, he wrote stories for The Guardian, and travelled around the area to observe the damages. He wasn’t the only journalist in the British Virgin Islands; many others parachuted in to cover the tragedy. But Dick-Read’s writing added an important perspective to the islands’ coverage. Because he lived there most of his life, he had many contacts in the area and incorporated a local perspective into his work. And as someone personally affected by the disaster, he viewed its impact through that lens.

Most stories published in Canada on Irma and Maria’s devastation came down the pipeline from AP. Since Canadian Press has a content-sharing partnership with AP, it received most of its on-the-ground Irma coverage, which was then relayed through the CP wire. But CP’s French service, La Presse Canadienne, did send a reporter and photographer to Florida. “For us, when we decide to send someone from the country to these places, it’s normally because we have a Canadian or a Quebec [angle],” Jean-Philippe Pineault, managing editor at La Presse Canadienne, said.

Because of the hurricane, many areas in Florida were inaccessible, and finding gas was a problem. This isolated two CP staffers, which limited the coverage. The objective was to get footage to create a story with a Canadian perspective, but they mostly relied on other wire reports. “You don’t want to put reporters’ lives in jeopardy, and you also don’t want to be an issue for the emergency service there,” he said, noting his worry for the two correspondents in Florida. “We were in contact 24 hours with the reporters there to make sure they had all they need[ed], and to make sure they were secure and safe as well.”

In the case of AP Caribbean news director Michael Weissenstein, covering the area had its own specific challenges, and the stakes were much higher. Weissenstein was in charge of coordinating each AP staffer’s movement around the region. “It’s always a question of whether you put people in the potential path of the hurricane, or whether you wait for it to pass over,” he said. “Because when a hurricane is hitting, the communications are really bad and it’s really hard to get people in.”

“Often the most important coverage is of the aftermath of the hurricane,” Weissenstein added.  “That’s the crucial time to have people on the ground.”

Weissenstein’s regular Caribbean team consists of six correspondents stationed in Cuba (two text correspondents, a photographer, and three video producers/camera people), two in Haiti, one in the Dominican Republic, one in Puerto Rico, and one in Miami. Even with these numbers, Weissenstein said that they couldn’t possibly cover every corner of the region with only AP staff.

“It’s a hard area to cover because the infrastructure goes down, so communications and airport infrastructure tends to go down, and also these places are expensive to get to,” he said. AP therefore makes use of what it calls “stringers”—or freelancers who double as local journalists. “We have people who can send us material even if they aren’t professional AP staff,” Weissenstein said. “The point of the freelancers is that they are there already.”

Other news organizations used social content to monitor the hurricanes. The Miami Herald used footage from people on the ground, and The Guardian and New York Times also used Twitter and social media content, embedding it in large stories.

As for Dick-Read, he has a home to rebuild and a business to salvage. “This tourist season is likely to be a non-starter, so I’m in need of an income,” he said when asked if he will continue writing for The Guardian. But the demand for news from the British Virgin Islands has dropped since the hurricane and ensuing cleanup, which Dick-Read said is just the reality of a busy news cycle. “We’ll see how it pans out.”