A Q&A with Ginella Massa, the first hijabi anchor in Canada 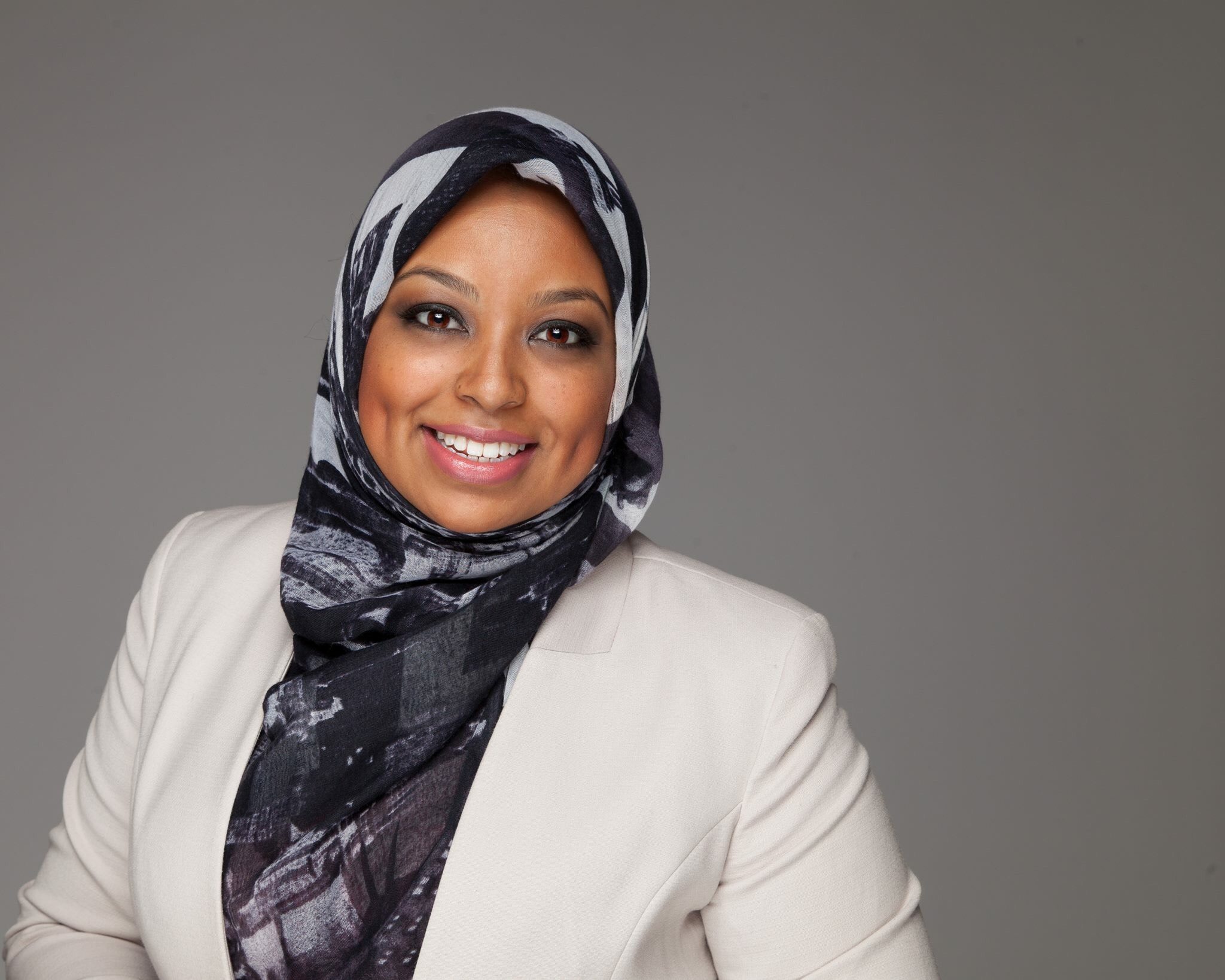 Ginella Massa, a journalist with CityNews, recently became the first hijabi woman to anchor a major Canadian news network. Having worked both in front of and behind the camera, Massa has spent years chasing her dream of becoming a broadcast anchor. In November, when another anchor was not able to complete the newscast for the 11 pm slot, Massa was there to fill in, and became the first Canadian anchor in hijab. She offers her thoughts to the RRJ on the state of diversity in newsrooms, her fascinating journey to this point, and her inspiring advice for young Muslim women.

MO: I know you’ve been inundated with interview requests: When I first emailed you there was only a story in HuffPo, but last night I saw you are in the New York Times!

GM: I got interviewed by AP and it went EVERYWHERE. It really went international then. I had people being like “My parents read about you in the Pakistani newspaper” someone tweeted me “you were in the Times of Israel.”

MO: What does it mean to you to have this platform?

GM: I never saw anyone who looked like me on TV. That can tell you a lot about what you can do and where you belong. I’m really excited to be able to give young people an opportunity to see me, see themselves, see what they can do, and know that there’s a place for them in this Canada.

GM: When I was younger, I was really involved in public speaking, I would do speech competitions and plays, and I always really enjoyed being in the spotlight. It was broadcast that I was interested even more than news, I kind of fell into news. That said, I wondered if I would ever be accepted or if I would ever get a job on television. I remember telling my mom, “maybe I’ll just go into radio then it doesn’t matter what I look like.” And she said, “No if you want to be on TV, go for it. Just because it hasn’t been done before doesn’t mean you can’t do it.”

Mo: Good advice! When you first started doing news, where was your first journalism job?

GM: I went to CTV in Kitchener. January 2015, that my first on-air gig, but I’d worked in news as a producer and writer for about three years before that.

MO: What was your first on-air story?

GM: It was about clearing sidewalks for snow, and how the city had an interactive map to show you which sidewalks they were responsible for and which homeowners were responsible for. It was the first snow of the season, in the middle of January, and it was really exciting because it was super benign: Here I am just doing my job, just telling local news. I just happen to be wearing a scarf while doing it.

MO: Were you nervous?

GM: The nervousness came more from how I was going to be received. Was the newsroom suddenly going to get an influx of hateful emails? And were they going to decide, “We made a bad choice and we’ve got to let her go?” It wasn’t because I had ever doubted my abilities; I always worked really, really hard to make sure I was doing the best I could do, because I didn’t ever want to give them a reason not to hire me. So, I was most scared that it wasn’t going to be my skills or lack of that was going to keep me from succeeding, but people’s fears of taking that risk. I mean it’s scary enough doing your first live hit and be thinking about how you don’t want to stumble, you don’t want to mess up, you wanna do well, you don’t want embarrass yourself on TV. But now, having that added pressure of, “this is now a change-making moment,” and not knowing what the reaction is going to be.

MO: Was it difficult for you to get on air the first time?

GM: I feel like I was really lucky. I didn’t have any sort of connection with CTV Kitchener. I applied for a job online. I had actually applied for that job 3 times in the span of a year and a half. I was persistent, and in that time I had gotten some feedback from a different news director, who had said, “Hey, I don’t think you have enough shooting skills.” I was volunteering at Rogers TV as a reporter and a host, so I went back and said, “I need shooting experience. Can you put me out shooting?” And they said sure. I was doing what anybody in my field would do. I was applying for jobs, I was trying to make connections, I was getting feedback, and adding to my skill set. I was trying to be better, I was trying to be good enough to land the job and eventually, I did. It’s a really tough industry to be in; You have to find a way to stand out, you have to be the best, you have to make connections, because there are so many people clamoring for so few jobs.

That’s a wrap! Tonight wasn’t just important for me. I don’t think a woman in hijab has ever anchored a newscast in Canada. Thx @CityNews ❤️ pic.twitter.com/Uue2VVD41z

MO: What is your favourite type of story to cover?

GM: People’s stories! When I get to share someone’s experience, someone’s sadness or grief, as difficult as it is. I actually didn’t think I would ever enjoy covering crime or courts, but often there’s a very interesting story behind headlines. I love being able to do stories that create some impact—where after the story has run, something has changed, something has come of whatever issue was being discussed. News is a very powerful medium in that way. That’s why it’s so important for our newsrooms to be diverse and for them to look like the city we’re in, not just on air, but behind the scenes.

MO: How have you been handling any kind of pushback from people?

GM: The response has been overwhelmingly positive. Sometimes the negative messages, although few and far between, hit the hardest and sound the loudest. The most difficult part is to not respond. Sometimes I have to laugh, and that’s the only way to deal with it. Someone tweeted “Meet Canada’s first bacon-hating, hijab-wearing news anchor!” I thought it was the funniest thing! Add that to my list of accomplishments. But for the most part I remember or realize that most of the people who have something negative to say have never actually seen my work. They just saw a headline and a picture and they decided they have a problem with how I look. I will happily take criticism for my work, if you think that I haven’t been fair or I haven’t asked the right questions. If it just has to do with my appearance, I don’t really care what they have to say about me.

MO: How has the response been from the Muslim community? Has it been supportive or have you faced pushback?

GM: I haven’t, and I’m surprised that I haven’t. Often our community can be very critical about what is or isn’t appropriate for a young Muslim woman to be doing. I actually haven’t had any negative pushback within the Muslim community, just positivity for seeing someone who looks like them. I’ve been lucky so far.

MO: How has your hijab played a role in your success?

GM: It makes people remember me, for sure. I have had people reach out to me this past week who I encountered or connected with once three years ago. There aren’t that many women in hijabs in newsrooms. I’ve had some people say some really nice things about me because of my work. They don’t remember me just because of my hijab, they remember me because I was kind to them, or because I did my research before I interviewed them, or they thought I did a really good job on a story. That’s the impression I want to leave behind. Maybe my hijab is the first thing they see, but I hope it’s not the only thing they remember.

MO: I think I read something where you said there’s no female anchors with hijabs in the States as well. Is that true?

GM: I think so. I believe that to be true. In fact I’ve spoken with Muslim women in journalism in different capacities, as producers, writers, reporters, in radio, who have said that they have been told flat out, “It’s not going to happen. No one is going to hire you on TV.” It’s a very different climate there.

GM: More hopeful that maybe they’ll look at what we’re doing here. Look, we put a woman in a hijab on TV and the sky didn’t fall. Maybe this can open the door a tiny crack for them.

MO: What is the next thing for you? What do you hope to accomplish?

GM: That’s a really hard question to answer because this was the goal for so long. This was the thing I wanted to achieve, the top of the mountain. Now I’m here. So I’m trying to do the best that I can here, and I still have a lot to learn. I’m taking this moment one step at a time before I get too caught up in thinking about what’s next. Be present in the moment!

MO: What words of advice would you give for young Muslim women whether they’re in journalism or not?

GM: The same advice my parents gave me: don’t limit yourself. And work hard! You might have to work a little bit harder. But at the end of the day that work will show for itself. You have to believe in yourself before anyone else does. If you want someone to hire you, you have to drink your own Kool-Aid. You have to know you’re the best for the job, and be confident. That’s something that a lot of people who hired me saw. This [hijab] wasn’t an issue, I was there to do my job the best that I could.