The city now known as Winnipeg was originally named Nestawe’ya, meaning “Three Points.” It is situated where the Red River and the Assiniboine River meet, where Cree, Dakota and Anishinaabeg people had travelled from the north, west and south, respectively, uniting to create a new community in the late 1800s. It holds the largest Indigenous population out of any city in Canada.

Despite its rich history, it is only now, in 2018, that the city’s main paper, founded in 1872, has hired its first city Indigenous columnist, Niigaan Sinclair, who is Anishinaabe. Sinclair uses the space to focus on Winnipeg’s relationship with Indigenous peoples.

Since June 1 when he was appointed, Sinclair has written numerous opinion pieces related to Indigenous issues in Canada. Paul Samyn, editor of the Winnipeg Free Press, said that “While we have taken great pride in covering a wide range of issues involving First Nations and Métis and what have you, for years … those stories, as good as they’ve been, have been [largely] told through the eyes of people who are white.”

As of now, there are only two Indigenous staff writers at the Winnipeg Free Press, both being men. Approximately 93 per cent of the paper’s staff is white. This isn’t an accurate representation of the demographic of Winnipeg, seeing as Indigenous people made up approximately 11.8 per cent of the city’s population, according to Statistics Canada’s 2016 census. Winnipeg is also home to a diverse Asian community, which makes up about 22.4 per cent of its population, according to the same survey.

Though Sinclair writes from an Indigenous perspective, he does not see himself as “the Indigenous voice” on anything.

“It’s in my everyday experience,” he said, “I have a lot of passion about it.”

His family has experienced the first-hand effects of forced relocation and the residential school system, beginning with his great-grandparents, whose relatives were relocated from what is known as the St. Peter’s Indian Reserve to Peguis First Nation in 1907. But his great-grandparents resisted the move and Sinclair spent his childhood in what is now the city of Selkirk, where he delivered the Winnipeg Free Press door-to-door as a boy.

“I grew up with the Free Press on my kitchen table and I remember reading, dreaming, thinking that I’d be one day working for that or writing for that, and here I am,” he said. 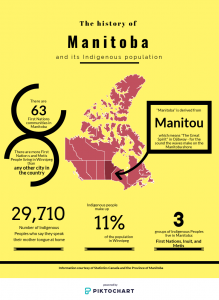 While this may be an accomplishment for Sinclair, the Free Press is just one of many Canadian news outlets with much improvement to be made. Sinclair’s hire comes three years after the Truth and Reconciliation Commission (TRC) called for federal funding for the CBC in order to increase the quality and number of Indigenous stories told in Canadian media, as well as equal access for Indigenous peoples to jobs and professional development within the CBC.

While hiring an Indigenous columnist is a good start toward the inclusion of Indigenous perspectives at the paper, Samyn said the Free Press is in no position to “go on hiring sprees,” given the financial realities in which the paper operates. “I wish I could,” he said, “but given the current challenges facing our newsroom and newsrooms anywhere, I’m very glad to have Niigaan on board.”

To resist tokenism, Sinclair said he feels it is up to the individual to decide what is done with the space they are given. For him, the voices that are missing are those of Indigenous women and the Indigenous LGBT community. “I don’t presume to speak for Indigenous women,” he says, “but what I would hope is that I would create space and step aside for those voices to come to the surface.” In Samyn’s editorial note introducing Sinclair, the paper said it regrets its failure to be inclusive. “In either case, the wit and wisdom Sinclair brings to these pages will provide a perspective I wish had always been part of our newspaper’s tradition, and an understanding that holds the promise of better days for all of us.