We’re looking at the wrong numbers

If it is to be believed, then the most popular medium to consume news by those over 35 years is television, who are also leading in newspaper and magazine consumption, as shown in the graph below. The main source of news, according to the data collected in 2013, for young Canadians is the internet and, surprisingly, television. 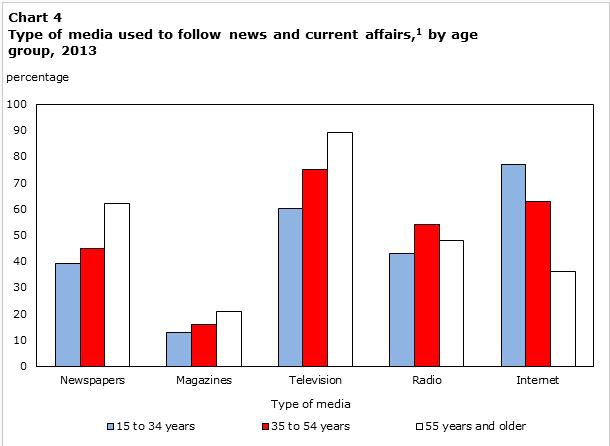 Yes, apparently, reality television hosted by the Peter Mansbridges of the country is still something we all watch, including those of us who have grown up with a phone in our hands and a computer screen not too far away. Also, who listens to news radio outside of a car? And if the approximately 45 percent of young Canadians who listen to radio news have cars, where can I get one?

Other reports claim that television news is dying, while this one says it’s thriving. Part of the problem is that we’re not aware of the way the questions were framed in this survey. Does television include video news found on social media? Are podcasts part of the radio category of this survey? Does it count if you’re reading the “newspapers” online? (Because, seriously, who gets newspapers? I saw one in the Review office a week ago. It was weird.)

The survey also found that 21 percent of young Canadians “rarely or never followed the news,” up from 11 percent in 2003. The reality this statement doesn’t capture is that the act of “following the news” has changed significantly from reading one paper or watching one broadcast channel to reading news in bits and pieces via shared links and trends. It might not “feel” like news, but “21 percent” doesn’t seem to capture this activity. Just look at the statistics for Buzzfeed, which were released a few days after the survey. Video traffic is high, content traffic is high, and it can’t all be easily explained.

We’re so busy trying to track progress and change in the Canadian journalism industry that we forget the value of numbers is only as good as our observations of where they are fluctuating. The government has decided it will start to look into exactly that: media concentration, its impact on local news reporting and how digital media fits into the whole picture. We should be doing it ourselves.

Perhaps the most interesting part of the survey—and, arguably, the most worrying—is that only 40 percent of Canadians surveyed said they have confidence in the media. Maybe, it’s time to turn our focus on this number and let the others fall into place automatically.Good journalism, after all, does well regardless of medium, publisher or byline. When we improve our audience’s confidence in us, we’ll increase in viewers, readers and shares. It’s a domino effect waiting to happen, as long we focus on the right number.

Fatima Syed is the blog editor of the spring 2016 issue of the Ryerson Review of Journalism.