The McGill Daily acknowledges its location on unceded indigenous territory

The McGill Daily, a student newspaper at McGill University, has taken a commendable step toward acknowledging the role journalism institutions in Canada have played in perpetuating discrimination against indigenous people.

A land acknowledgement, reading “The McGill Daily is located on unceded Kanien’Keha:Ka territory” is prominently displayed on the top-left corner of the Daily’s homepage, under the paper’s logo.

The land acknowledgement has appeared in the newspaper’s print edition, on the front cover, since the September 28 edition. 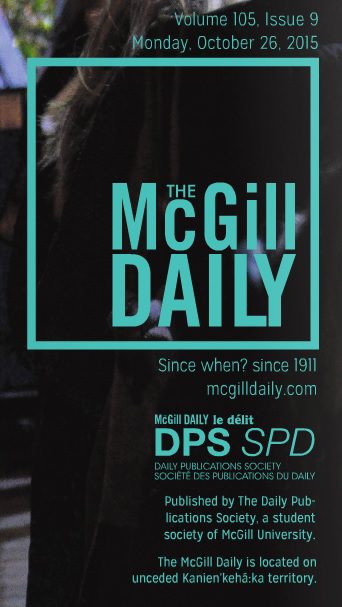 The About Us section of the Daily website also includes a more detailed land acknowledgement:

Igor Sadikov, third-year McGill student and commentary editor at the Daily, says the decision was made at an editorial board meeting early this academic year. “There wasn’t much debate about it. We pretty much agreed it was a good idea because it’s important to show solidarity with the Kanien’Keha:Ka people on whose land we operate our paper.”

The suggestion for a land acknowledgement came in an indigenous solidarity workshop the Daily editors attended, held by the Social Equity and Diversity Office at McGill, part of a broad range of “anti-oppressive training” that takes place prior to the start of the year. The McGill Tribune, another prominent campus newspaper, does not have a land acknowledgement on its website. Several student unions at McGill have also posted land acknowledgements on their websites within the last couple years, Sadikov notes, so the Daily followed their lead.

This practice is not currently in place at the Ryerson Review of Journalism (RRJ), and while I can’t change this policy myself, I can say that the RRJ office is built on unceded land, on the traditional territory of the Anishnabe, often referred to as the Mississauga.

Sadikov says he hopes this practice will become a norm at journalism institutions in Canada, claiming it would be a good way to educate the public, because these publications can reach wide audiences. None of the mainstream publications in Canada currently feature land acknowledgements on their website, nor do some alternative publications like This.

Major journalism institutions can learn from the Daily and strive to incorporate more training for employees, as well as outside consultation on the style guide (for example, to help fix things like the fact that I’m forced to write “indigenous” instead of “Indigenous” because the Canadian Press style guide says so). As such, this move by the Daily is a good example of how student newspapers often lead the way in crafting ethical journalism, as opposed to just being training grounds for prominent journalists of the future.

Full disclosure: I worked as a copy editor at the McGill Daily in the 2013-2014 academic year and an opinion columnist in the 2011-2012 academic year.

Davide is the blog editor of the spring 2016 issue of the Ryerson Review of Journalism. He also works as an associate editor for the Islamic Monthly. Davide's articles have appeared in numerous publications including Al Jazeera America, The Globe and Mail and the National Post.