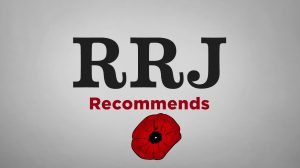 In 1932, Maclean’s published Will R. Bird’s “Thirteen Years After” in 16 installments over 10 months (sadly, it’s only available online via Maclean’s archives). For nearly two years, Bird, a native of Nova Scotia, fought with the Canadian Expeditionary Force. He arrived in France in 1917, stormed Vimy Ridge and bore the German Spring Offensive in 1918. Then, he spearheaded the Allies’s Hundred Days, which finished in Mons, Belgium, on November 11. Thirteen years later, he toured it all again and took stock.

The series was later compiled into a book and published in the wake of popular war literature, including All Quiet on the Western Front and Goodbye to All That, but there’s little of Erich Maria Remarque’s intimate brutality or of Robert Graves’s disillusionment. Instead, Bird keeps an eye on the war rather than soak in it. “Thirteen Years After” stands out amongst war-lit canon for its bittersweet balance of past and future. He accedes to nostalgia and searches for familiar sites on his old stomping grounds. Like the local boy-made-good returning to the hometown he escaped, he finds little of it left, and it gladly moved on without him.

Bird’s adopted hometown isn’t Vimy or Mons, nor any town you’d find along the French/Belgian border. Bird grew up in Watling Crater, Zouave Valley, and the Pimple—names drawn on Allied military maps. That’s his geography, and at a glance, in places, it’s gone. On the road from Wieltje to Passchendaele, the latter famous for its suffocating mud, Bird notes that, “every house along the way is old in design but brand new; every village, every home and church is an exact replica of the original.” Almost to fault, he barely recognizes the towns he visited or was billeted during the war. Occasionally, though, those old memories briefly superimpose themselves over the new.

Bird finds war wounds in the details. In Arras, replacement bricks stand out amongst the old, and prewar buildings bear scars from shrapnel. In the country, caches of arms and rum rations are occasionally recovered. Farmers in the Salient—Ypres, on French maps, and the site of the first gas attack of the war—unearth corpses and live shells, which sometimes explode. Bird recounts another farmer finding an entire plane, pilot and all. Despite the occasional danger, a grey market of recovering and selling British and German rifles (they went for 15 and 25 cents, respectively) thrives on the old battlefields. Polish workers are paid good money to probe the ground with iron poles to find bodies. The war loiters, but it’s a benign nuisance and cottage industry that’s largely stripped of violence and rendered in fractured pastoral.

Action is animated only in Bird’s memory as he recalls attacks, or its frozen in memorandum. At Vimy, where the national memorial is still being constructed. Bird marvels that the trenches look more like they did in the last week of 1917, immediately after the Canadians’s famous assault, than in 1918 after they had been repaired. Barbed wire still surrounds the Pimple. Old mess tins litter shallow valleys and old bombs are everywhere—a live shell was even excavated, deactivated, and replaced. “It was easy,” Bird says, “to give fancy full rein.” He reports that many soldiers, Canadian, British, and French, visit their old, adopted hometowns, their respective wartime stomping grounds, and do just that. They talk of their heroics then condemn it all.

Bird’s “Thirteen Years” isn’t about the fall of a generation and an epoch like Remarque’s and Graves’s novels, and so much other war literature. “Thirteen Years” isn’t romantic, nor is it agnostic. It’s optimistic. In “Thirteen Years,” the war is a series of ruins on the landscape being overtaken by entropy and the people it displaced. It’s a benign shadow etched in the details of cities and the countryside. It’s demonstrable proof that despite the incredible violence people can inflict on one another, it’s aberrative and finite. It’s an unnatural phenomena. But as Bird turns back to view old towns, or hops into old dugouts and shell craters, his observance makes it clear that it’s not forgotten.