Into the Wide, Open Land of Podcasts

On stage at the Hot Docs Podcast Festival in Toronto last month, five podcasters discussed creating a true crime podcast series for CBC. Host Ian Hanomansing asked the reporters what was next for them.

Connie Walker, host of Missing and Murdered, said she was leaving the CBC after a 19-year career with the public broadcaster. “I’m moving to the States to become one of those American podcasters at Gimlet Media,” Walker said.

Josh Bloch, host of Uncover: Escaping NXIVM, told the crowd that he, too, was “dabbling in American podcasts.” He is currently producing a podcast for Universal Content Productions (UCP), which is backed by NBC Universal. UCP Audio will launch three serialized podcasts in 2020 and Bloch will host one.

In September, after nearly two decades working at the CBC, including a 17-year commitment to The Current, producer Kathleen Goldhar left the public broadcaster. She is now the executive producer in charge of production at Antica Productions.

Increasingly, there are more options for Canadian audio producers to make longform audio stories outside of CBC. As the market expands, audio storytellers are finding work at private Canadian podcasting companies or moving south of the border.

The Canadian Podcast Listener Survey says that nearly 11 million Canadian adults— 37 percent of the adult population—have listened to podcasts in the past year.

CBC started to produce original podcast series in 2015. As the podcasting market expanded, private media companies started to spring up in Canada. In December 2016, The Antica Podcast Network (now called Antica Productions) was launched in partnership with Entertainment One. It has been an independent company since May. In June 2018, Rogers launched Frequency Podcast Network, followed by the acquisition of Pacific Content earlier this year.

Kathleen Goldhar got her first taste of podcasting three years ago, producing two of CBC’s true crime podcasts, Uncover: Escaping NXIVM and Uncover: Sharmini. She says her time working on Uncover was the best professional experience of her life and she never looked back.

Until last year, Goldhar says she never thought she could tell audio stories and make a decent salary outside of the CBC in Canada. “It was always at CBC. There was nowhere else to do the work that I did, because CBC was the only place producing quality, important, strong, journalistic audio stories.”

As business has grown around the podcast industry, though, demand for people with audio skills has grown too. Goldhar says that radio is a “small world, and so there’s not that many of us who can do what we can do.”

Many audio producers in Canada got their start at CBC, says Jeff Ulster, owner of Ulster Media, an independent podcast and digital audio consulting company based in Toronto.

From 2011 to 2017, Ulster was the director of digital talk content for CBC. He is now the co-founder of The Podcast Exchange and co-publisher of the Canadian Podcast Listener Survey.

Ulster says he thinks the competition is good for CBC, because producers aren’t confined to the “public broadcaster lens.” For example, CBC’s mandate states their programming should be “distinctively Canadian” and “contribute to shared national consciousness and identity.”

Creative freedom isn’t the only draw to private media companies. In recent years, precarious, casual work has become a common narrative at CBC, meaning a job in the private sector may provide more steady employment for an audio producer.

In 2015, after a 10-year career at CBC, Dan Misener started to look around at how things were changing in the audio industry. He noticed U.S. companies like Gimlet Media and Radiotopia being founded. “It seemed like CBC was not the only place doing the kind of work that I was interested in,” Misener says.

Shortly after, Misener was approached by former CBC colleagues who were starting Vancouver-based Pacific Content—a company that makes branded podcasts. Steve Pratt, vice president of Pacific Content, co-founded the company in 2014 after a decade of working at CBC as the director of digital content.

Misener left his full-time position at the public broadcaster in late 2015. He is now the head of strategy and audience development at Pacific Content.

Misener says most of the people working at Pacific Content have a traditional or legacy media background, whether it’s in radio, television, film, or print. “For me, the move to leave a traditional media company came in part because I looked around and was really excited about the opportunity and the growth in podcast land.”

To Misener, the next wave of podcasting will be marked by innovative and experimental storytelling. “I want podcasting to outgrow its radio roots.”

Other former CBC producers found opportunities in the U.S. podcast market. Audio producer Chris Berube worked for CBC Radio 3 and q. He moved to the U.S. to work for Slate and Pineapple Street Media in 2016, and then came back to the CBC to launch Front Burner.

Now, he’s returning to the private sector. Berube works as an audio producer and editor for 99% Invisible, an independently produced radio show that focuses on design and architecture. He says it’s a dream job for him. He has access to resources, the show reaches a large audience, and he works with producers who have an ear for great narrative audio.

“I’ve always loved the show and the people who work on it. They’ve made some of my favorite audio that I’ve ever heard,” Berube says.

Berube says people he works with in private radio came up through public radio, so they have a similar outlook based on public service, finding an interesting story and a sense of mission. “They have that in their DNA.”

When Berube first started working for American radio companies, he says many people had never heard of the Canadian public broadcaster. Since then, CBC has figured out how to make podcasts that reach American audiences—“calling-card” shows like Missing and Murdered and Someone Knows Something.

While the private podcast industry expands, CBC remains a power player in its own country. The public broadcaster’s Uncover, Front Burner, and Hunting Warhead are currently in the top 25 on the Canadian iTunes podcast charts.

The public broadcaster’s access to a wide market makes it easier for listeners to discover new content and series. At Antica, Goldhar says it’s a challenge to engage with listeners in the same way. “You put a podcast out on CBC and you are in the number one position right away. We don’t have that. We have to work differently and harder,” Goldhar says.

But while she may struggle to find an audience, the chance to engage with something fresh and exciting makes her work worth it. “I’m the boss. I make decisions. I work with a small team. It’s just us,” says Goldhar.

Goldhar says people are leaving because there are opportunities that didn’t exist before. Now that CBC has competition, they’re going to have to “start paying attention and doing some things differently.”

“We’re in the Wild West of podcasting,” Goldhar says. And CBC isn’t the only sheriff in town anymore.

[Correction: This article has been amended to reflect that Antica Productions has been independent from Entertainment One since May 2019.] 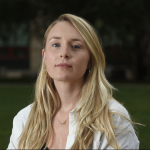 Emily Latimer is a senior digital editor at the Ryerson Review of Journalism. Last year she shelved half-finished screenplays to pursue journalism. She has interned as a web writer at CBC Halifax and worked as a reporter and editor at CBC Cape Breton.