In July 2012 I reached out to Xtra, Toronto’s free gay and lesbian newspaper, in hopes of becoming an intern. Then-managing editor Danny Glenwright invited me up to the Pink Triangle Press offices and sifted through some of my clippings before asking his only question of the interview: “Why do you want to volunteer your time here?”

The answer was—and still is—straightforward: I am a young gay journalist who cares about the treatment of LGBTQ people in Canada. That should be reason enough to pursue work at a paper like Xtra. It does pride itself, after all, on being the voice of “everything gay.”

For more than three decades, Xtra has been a staple read for Canada’s LGBTQ community. It began originally as a promotional tool for The Body Politic in 1984, eventually outgrowing its parent mag and coming into its own. For the past two and a half years, I have been curating its letters page. But all that is coming to end this February. On January 14, Pink Triangle Press announced it would cease the printing of Xtra’s Toronto, Ottawa and Vancouver paper issues, opting for a digital-only publication—marking the end of the days you could pick up an issue from Xtra’s trademark bright pink news boxes on street corners. 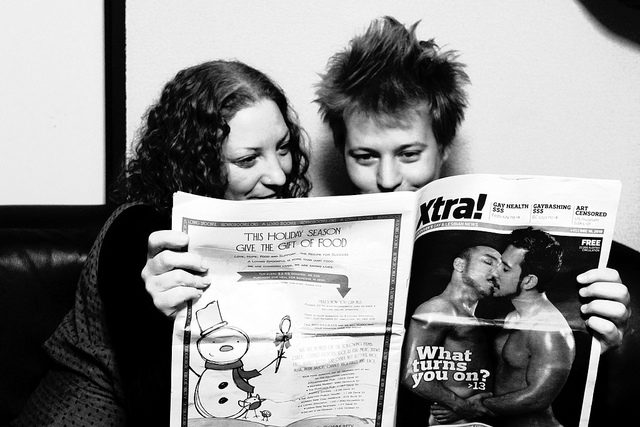 Though the news is not a surprise to me (financial instability is a reality for most free papers these days), it is incredibly saddening. The end of Xtra as a print product signals the end of the standout attitude its gay writers and columnists brought to the streets of Toronto. Plenty of passersby were taken aback or even disgusted by the covers Xtra would fearlessly print—half-naked men, cartoon women wearing nipple tassels and alien Stephen Harpers never seemed too far away. But whether the paper’s content would cause discomfort to those who saw it never seemed to concern Xtra. And for those in the community, like me, the covers were always funny, content always inspiring. The offbeat photos and stories were something we could relate to and often laugh about.

What first drew me to the paper, though, was not its outlandish covers, but its content. In it, I found news that mattered to me about issues that concerned people just like me. In 2011, reporter Andrea Houston’s coverage of gay-straight alliances in Catholic high schools sparked debate that led to the passage of Bill 13 in Ontario. For years, it has put out guides to Pride (something newly out-of-the-closet 16-year-old me loved). And most recently, the paper put together a series about PrEP, the latest in HIV-prevention treatment. Xtra long celebrated a part of my identity that I struggled to come to love.

While the paper will still exist online in all its gay glory, I’ll miss the sense of pride in seeing those bright pink boxes throughout the city.

Thanks to Joy Waller for the featured image.

Erica Lenti was the Spring 2015 editor of the RRJ.