The latest issue of Bloomberg Businessweek took aim at the Weather Channel for its clickbait headlines and lack of actual weather coverage. 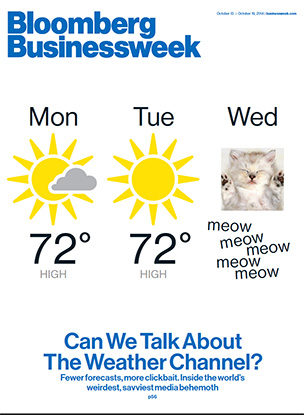 You won’t believe what that cat says next.

Meanwhile, one WREG News Channel 3 employee may have copied a link from the wrong browser tab when inviting people to check out their interactive radar:

Finally, in a move to attract more visitors, accuweather.com compiled the best mistakes by their hosts in September. It’s difficult to imagine how long their annual compilation would be. But as the video’s tagline says, they’re “improving every day!”